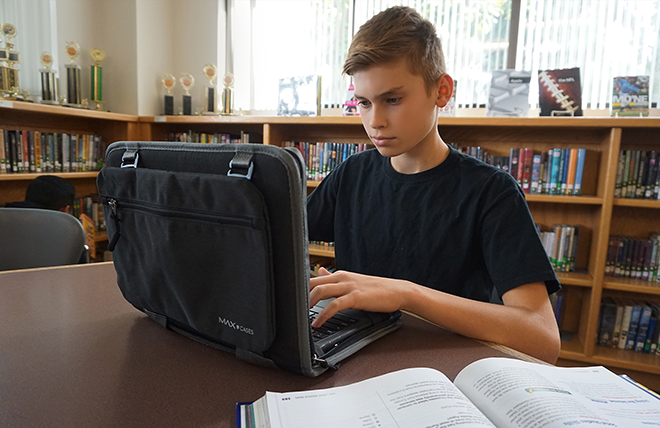 School can be an exciting and rewarding place to be, a home-away-from-home where students can make friends, learn, and create memories. However, as students reach adolescence, research shows that this flame often begins to die out. Students lose interest in classes and may dread going to school. In other words, they become disengaged.

Unfortunately, student disengagement is nothing new. Levels of student engagement were low well before the covid-19 pandemic. In fact, a Gallup poll of almost 1 million U.S. students showed that only half of the adolescents surveyed reported that they felt engaged in school. Worse yet, twenty percent reported that they were actively disengaged. Furthermore, the study demonstrates that this trend toward disengagement gets worse as students age.

The National Association of Independent Schools describes student engagement as meaningful involvement throughout a student’s learning environment. When a student is engaged with school, they are actively participating both inside and outside the classroom. This engagement can be broken down into three types: behavioral, emotional, and cognitive.

• Behavioral engagement. A behaviorally engaged student shows up to class prepared, asks questions, and engages in important discussions with peers. Outside of the classroom, they participate in social and extracurricular activities that are interesting to them: from happily attending school dances to participating in debate club.
• Emotional engagement. This occurs when a student feels like they belong to the school and are an important member of their school community. Emotional engagement is often overlooked, but is just as important as the other two types of engagement. An emotionally engaged student picks up after themselves and roots for their school sports teams.
• Cognitive engagement. A cognitively engaged student is the captain of their own education. They are invested in their learning and take ownership by showing up for extra tutoring hours and challenging themselves even when no one is looking over their shoulder.

It can be frustrating and disheartening to teach a student who is actively disengaged and not living up to their potential, particularly when you understand its ultimate impact on their lives.

According to research, and as reported by edutopia.com, disengagement results in a host of adverse impacts, all of which have corresponding negative implications for a student’s future. When students are disengaged, it:
• Lowers cognitive performance
• Increases disruptive behaviors
• Causes academic avoidance behaviors
• Exacerbates learning, behavior, and emotional problems
• Increases absenteeism and dropout rates

On the other hand, when a student is engaged with school, not only do they master academic subjects, they’re also more likely to lead full lives outside of the classroom and have bright futures ahead of them.

The impact of Covid-19 on student engagement


Covid-19 worsened the existing disengagement crisis. According to the Organisation for Economic Co-operation and Development (OECD), the pandemic forced school closures in 188 countries, disrupting the lives of 1.7 billion children and their families worldwide. From the sudden lack of routine to having to navigate remote learning, often on their own, it’s no wonder that an estimated 1.3 million students stopped engaging with school at the end of the 2019-2020 academic year.

The good news is that most schools quickly adapted and began to provide learning via remote platforms. In low-income areas with fewer resources, community groups joined schools to help provide food, computers and internet access. By May, 2020 surveys indicated that 95% to 99% of teachers were effectively facilitating remote instruction. Nearly 90% of families indicated that their children were receiving educational resources from their schools.

Nonetheless, as the new school year began in the fall of 2020, it became clear that student disengagement was rampant. School leaders began reporting an unprecedented number of disengaged students. In a conversation with school superintendents at a virtual conference, MAXCases founder and vice president of sales Grady Austin said that, along with teacher burnout, disengagement was the top topic.

“They were all concerned about losing students,” said Austin. “Disengagement was on all their minds. At every level, they said, students were doing worse than pre-covid.”

No of you will be surprised to hear that this has led to sweeping learning loss across grades and subjects, with K-8 student math scores suffering the greatest decline.

There is hope: Strategies to combat student disengagement

Teachers have more power than they may realize to impact students’ lives, even beyond the basics of academic learning. Check out Part Two in this series to learn strategies for boosting engagement during remote learning.

Get in touch and request your FREE evaluation case!